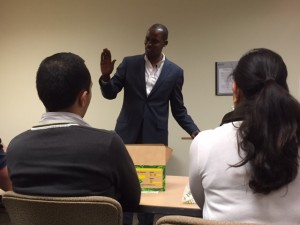 Friday’s Leadership in High Growth Startups event hosted by ATDC and High Tech Ministries was perhaps the best, most meaningful startup leadership talk I’ve seen all year. The speaker was Elijah Sebuchu, a Pastor from Uganda.  He shared his story and the leadership lessons he learned building his own high growth startup – Hands of Love.  If you missed it – you can listen to his talk HERE.

Elijah was born in a swamp in Uganda as one of 38 children in a polygamous family. He was born into poverty most of us can’t imagine. He didn’t have a blanket until he was 13. He didn’t own a pair of shoes until he was 15. His name, Sebuchu, was chosen in a ritual where hens are given names and tossed in the air. The first to touch down became his name. Sebuchu means “great leader” – and from a very young age Elijah’s Mom told him he would become a great leader.

He was one of the few fortunate that was afforded an education. He went on to get a degree from a local seminary and launched his ministry. As he grew his ministry in a country ravaged by war and HIV, Elijah and his wife Ruth were drawn to the plight of the countless orphans wandering the streets and countryside that had lost their parents. With only $10 to his name, they walked miles to a plot of 5 acres in a remote part of Uganda where they used a machete they were given and their bare hands to build mud huts. With 70% of the country under the age of 24, his vision was to help feed, clothe, shelter, love, and educate these children who had no one to care for them. Two weeks later, 180 kids showed up and his orphanage was born!

Lesson 1: Relationships are better than meat

Elijah and Ruth found themselves with 180 kids, a few mud huts, and no resources. Elijah remembered his mother often told him “relationships are better than meat.” So he began to reach out to people for help on the internet and was connected to a caring German man that put him in contact with a wealthy individual from the UK. This person offered to buy him a home and a car. He told them he didn’t need either – what he needed was introductions to the man’s network. Those relationships led to the founding of Hands of Love, the foundation that supports their work.

Lesson 2: Have a compelling vision

When one of the children in the orphanage reached high school age, she asked Elijah and Ruth for a job at the orphanage. He told her they had nothing to pay her with. This remarkable young woman decided to stay and work for free. She became employee #3. They later used some of the money they raised to send her to college. As she was the first female to graduate in her region, thousands of people showed up for her graduation. She received multiple job offers and people even sent her money. She turned them all down, telling them she was born to work at the orphanage.

Your vision is what motivates people. In a country with 70% unemployment, Elijah’s vision inspired that young woman and many others, including some with advanced degrees, to work for 10% of what they might earn elsewhere.

Another child of the orphanage went on to graduate college and earn an advanced degree. She had job offers for six figure salaries, but instead chose to return to the orphanage to work for only $350 per month – telling Elijah and Ruth that she would leave “only in death”. This woman went on to help build the foundation that funds their activities.

“Love your people. If you do, they will do their best.” People can only be incented so much with money – what they really want is love and belonging. If you love and develop them, they will love and develop others. This love fueled 300% growth in his organization in just 3 years. Quoting Jack Welch, Elijah reminded us “Before you become a leader, success is all about yourself. When you become a leader, success is about growing others.”

He shared a story of travelling to the United States for the first time to speak in Los Angeles. When he was alone in his hotel, he found himself virtually paralyzed by what he was seeing. “What is this?” Coming from abject poverty and a country ravaged by war and AIDS, at first he couldn’t bring himself to eat or even sleep in the bed. He was introduced to Pastor Rick Warren, who asked how he could help. Elijah’s request was tell him one thing he could do to grow his orphanage. Pastor Warren told him “keep learning”.

Since then, his journey has been one of continuous learning and he strives “to be wiser tomorrow than he was today”. Quoting Abraham Lincoln, Elijah told us “A single conversation with a wise man is better than 10 years of learning.”

Elijah’s vision and love has “captivated Uganda and taken Africa by storm.” When Elijah prays, he said he prays for relationships.  His prayers are being answered. Through the help of others his organization has grown to over 300 employees that support 1426 children in their orphanage and schools. He has become a well-known leader and speaker across Africa. And today, he does have a home and a car.  As his mom predicted, Pastor Elijah has certainly become a great leader!

Hands of Love’s US foundation is located right here in Atlanta.  I encourage you to visit http://www.handsofloveusa.org/ to learn more and see how you can help.

My guest blog in The SaportaReport about the importance of VC funding in Atlanta & Georgia:

Entrepreneurs building technology startups need more than an idea and a great team. Unless you have deep pockets or wealthy relatives, chances are you will require outside investment to turn your passion into a high-growth success.

That’s where venture capital comes in. VC firms are professional managers of risk capital that fund new innovations by investing in promising early-stage companies. These companies aren’t at the stage where it’s possible to secure traditional bank loans or raise money in the public markets.

Compared to other technology hotbeds like California, Massachusetts, New York and Texas, access to capital is a critical challenge for Georgia’s tech entrepreneurs. The state’s share of national venture capital investments in 2013 was only one percent, while the entire Southeast saw just three percent of those dollars. Georgia also trails Virginia and North Carolina in seed and early stage investments.

The lack of capital is not just a problem for entrepreneurs. It affects all Georgians because when it comes to job growth, startups are everything. A recent study by the Kauffman Foundation highlighted the fact that since 1977, most net new jobs in the United States are created by startups. Improving access to capital is critical for keeping our best and brightest entrepreneurs from leaving the state to find the financing they need.

The funding shortage in Georgia is a big opportunity for early-stage venture capital and angel investors. The current level of investment in the state does not match the level of entrepreneurial activity and innovation coming out of our startups and research universities. For local investors, finding deal flow is easier and less competitive here than in other parts of the country. This is why I started Tech Square Ventures, a seed and early-stage fund investing in technology startups. We’re putting our money to work right here in Atlanta and across the Southeast.

And last week, Atlanta tech startup hopefuls got their chance.

On Oct. 21-22, a full house of local entrepreneurs gathered at the Georgia Aquarium to “swim with the sharks” at Venture Atlanta, the premier technology conference in the Southeast that connects entrepreneurs with the capital they need to grow their business. At the event, 33 local and regional startups presented to more than 125 investors from across the country in hopes of attracting the funding they need to propel them to success.

Atlanta has all the key ingredients for a thriving technology startup ecosystem: talented innovators, world-class research universities and a history of startup success. We have a strong base of FORTUNE 1000 companies here, which makes it a great place for entrepreneurs to find early customers and connect with industry executives for networking and mentoring. But, it also takes capital to fuel that ecosystem, and Venture Atlanta is doing its part.

When local startups succeed, we all win.