Last month,  Urvaksh Karkaria of the Atlanta Business Chronicle was kind enough to write an article (click here to read) on my new seed and early stage venture fund, Tech Square Ventures.  The article speculated I might be “stepping onto a crowded field” and had quotes that supported the view that there was no shortage of funding for Atlanta’s entrepreneurs.  Several people have asked what I thought about that.  Obviously I don’t agree or I wouldn’t be launching a new seed and early stage fund!

In an earlier post, Does Georgia Have a Venture Funding Shortage, I pulled together statistics from the PWC Moneytree report to see how we stacked up against other leading tech hubs.  With 2013 behind us, I took a look at the latest data to see what has changed. 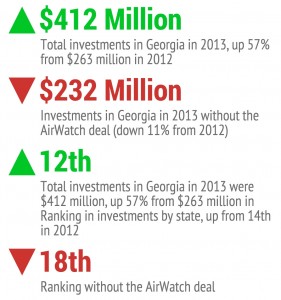 In the previous post I compared Georgia to leading tech hubs North Carolina, Texas, Massachusetts, and New York.  I did the same with 2013 data and, like before, I left out Silicon Valley – we already know the answer to that.

Among those tech hubs, Georgia lags all but North Carolina in venture investments, and they have up to 7x the amount invested here in Georgia. 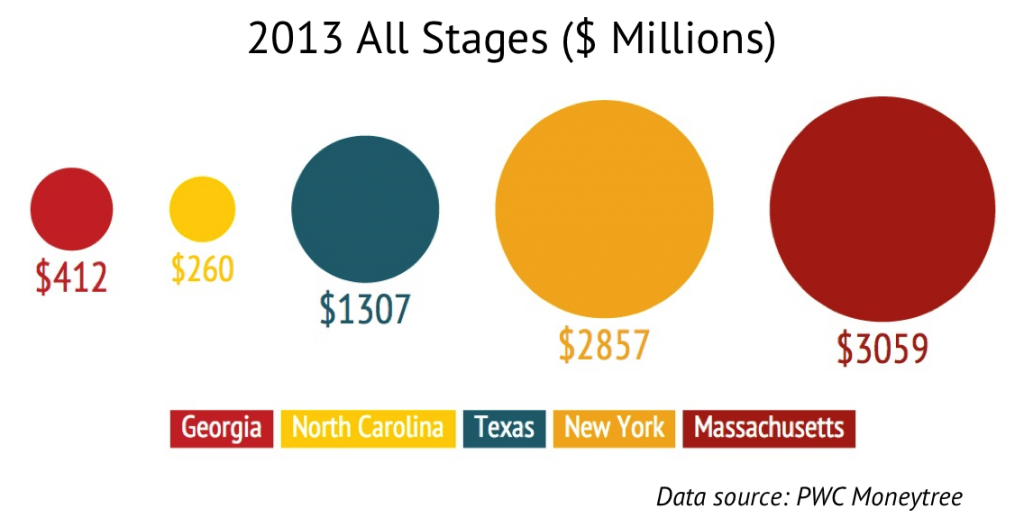 Perhaps more surprising is the fact that Georgia ranks only 4th in the Southeast – trailing Maryland, Virginia, and Florida.  Without the AirWatch deal, Georgia would have been ranked 5th.  Georgia also ranks 4th in seed & early stage investments behind Maryland, Virginia, and North Carolina.  When looking towards the future, one statistic stands out:  seed & early stage investments represent 17% of the total amount invested in Georgia, while in all 3 states ahead of us it represents more than 33%.  Those states are investing in more robust pipelines going forward. 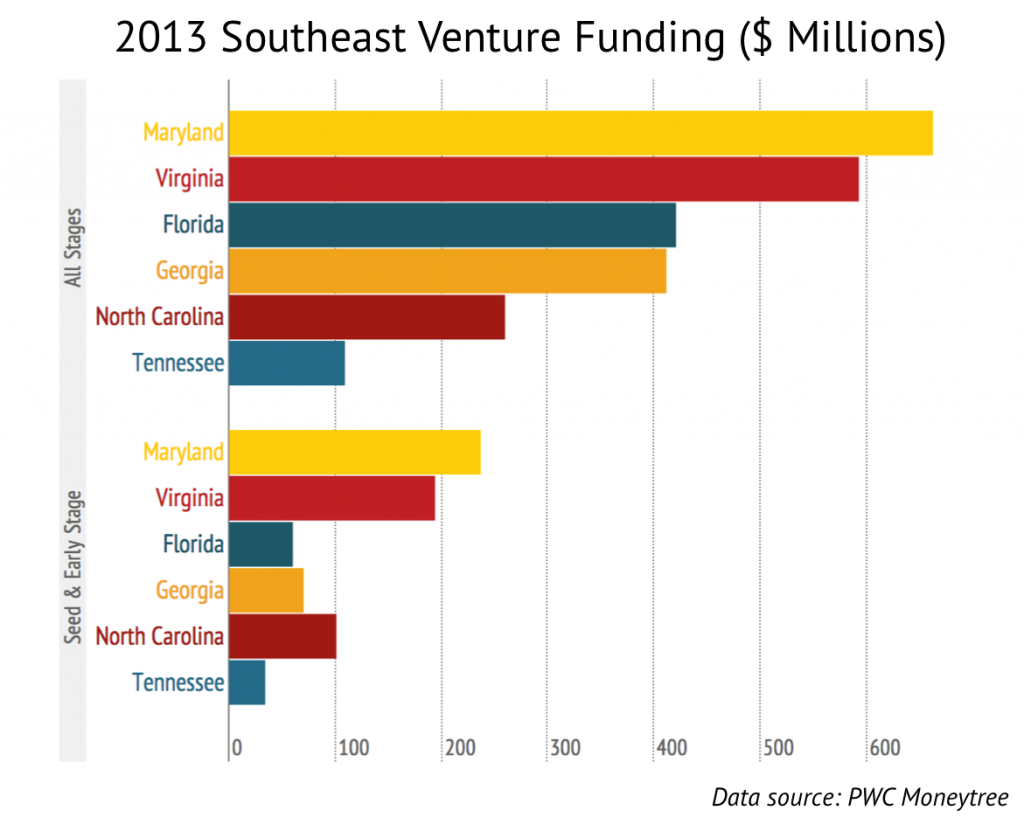 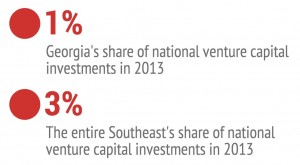 Much of the increase in startup activity we saw in 2013 in Atlanta was essentially ‘pre-seed’ activity.  Out of all that activity will emerge a greater number of fundable companies.

Crowded field?  In this case I think my friend Urvaksh is off base, and the data supports that.  I started Tech Square Ventures because I believe the current level of investment does not reflect the opportunity here.  In short, I’m betting on our entrepreneurs and area research universities to generate plenty of opportunities for investment. 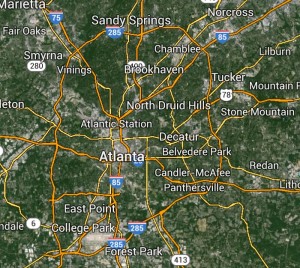 In just the first few weeks since launching Tech Square Ventures, I’ve met one-on-one with 16 startups (some multiple times) and looked at materials from dozens of additional companies.

What I have quickly learned is the hardest part of evaluating opportunities is getting up to speed on the specific addressable market the startup serves.

Breaking down the addressable market and the specific pain in the market that the startup solves is a challenge with early stage companies.  I look to get a handle on the intensity of the pain the solution addresses and the size of the market that has that pain.  I look to understand how those customers are solving that pain today (competition). I also look to understand the industry conditions to determine market readiness for change necessary to drive adoption of the startup’s innovative solution.

The other night I was talking about this with my wife, Stephanie.  We recently moved so I compared it to shopping for a house.

When you shop for a house, you don’t try to add up the cost of the lumber, drywall, and roofing materials to determine the value.  You compare it to other houses in the neighborhood.  Without understanding the market and industry conditions, it’s like knowing the details on the house, but not what where it is.

Startups that have gone through programs like Customer Discovery and Gauntlet at ATDC, Flashpoint, VentureLab / NSF-iCorps, or other similar programs have a significantly better grasp on their target customer, addressable market, and industry conditions – and they are better at communicating it.  When pitching an investor – make sure you help them understand what neighborhood you are in.

The cat is out of the bag. Last week Urvaksh broke the news on my new seed and early stage venture fund. I launched Tech Square Ventures to invest in innovative technology startups in the Southeast that have the potential to transform their markets.

The $10 million seed and early stage fund will partner with visionary entrepreneurs building startups in sectors that leverage the strengths of the Southeast and our area research universities. While we will be opportunistic in our investment activity, our primary focus will be on information technology and connectivity. In information technology we’ll be looking at SaaS, security, fintech & eCommerce, big data & cloud, and healthcare IT startups. In connectivity we’ll be looking at connected devices, ‘internet of things’, medical devices, sensors, and mobility.

Tech Square Ventures will typically look to initially invest in the first round after friends and family, and make follow on investments in the successful, growing startups. I hope to do 3 or 4 deals this year. We will typically co-invest with other angel and early stage fund investors. The criteria we’ll be looking for include:

Feedback from the startup community and support from local investors has been humbling.  I can’t thank everyone enough!  In the coming weeks I’ll post more thoughts about the fund, why I launched it, and answer some of the most common questions I’ve gotten since the fund was announced. In the mean time David Cummings posted a great article about the mechanics of a fund this size. While it doesn’t match my plans exactly – it is directionally correct.