I reported bright and early this morning to the Fulton County Justice Center on Central Avenue in Downtown Atlanta for jury duty.  It was the first time I’ve ever been summoned for jury duty.  My guess is moving around 5 cities, including one overseas, kept me off earlier lists.

In the days leading up to this morning, several well-meaning folks offered advice on what to say to ‘get out of it’.  As bad as the timing was for me, I wasn’t going to duck my responsibility.  I’m glad I live in a country with trial by jury!  Jury duty seems to be a pretty small sacrifice as far as civic duties goes.  Certainly smaller than the sacrifices my brother has made serving in the Army with two tours in Iraq!

After a boring day that felt exactly like waiting around at the airport, I was released without being called for jury selection.  As a change of pace, I thought I’d post a few things you might want to know when reporting for jury duty in Atlanta:

As for what to expect if you are picked for jury selection, or chosen to sit on a jury – I can’t help you there.  My civic duty ended when they called my name out shortly after lunch, thanked me for my service, and let me go home with a promise to not be called for jury duty for at least 18 months.

Earlier, I wrote a blog post about ‘pillar companies’ (read it here).

Pillar companies are the trees in the startup rainforest ecosystem – large, local, (mostly) publicly traded companies.  They are big successes that produce lots of talent, wealth, and companies willing to bet on other startups’ products.  Talent that moves on to new ventures and builds a mentor network.  Wealth that fuels a healthy angel network and produces LPs for venture funds.

In the post I mentioned that recently Atlanta entrepreneurs often cash out before scaling.  I used the qualifier ‘recently’ because although Atlanta has clearly had it’s share of pillar companies, most of the examples were a decade or more ago.

So that got me thinking – what changed?  Conversations with other entrepreneurs and investors brought up a variety of theories, but they all revolved around a single factor – liquidity.

As this chart of tech IPOs over the past 30 years from the New York Times illustrates, the trend since the early 2000’s has been fewer and larger IPOs, requiring more revenue (with a few exceptions) to go public than in the past. 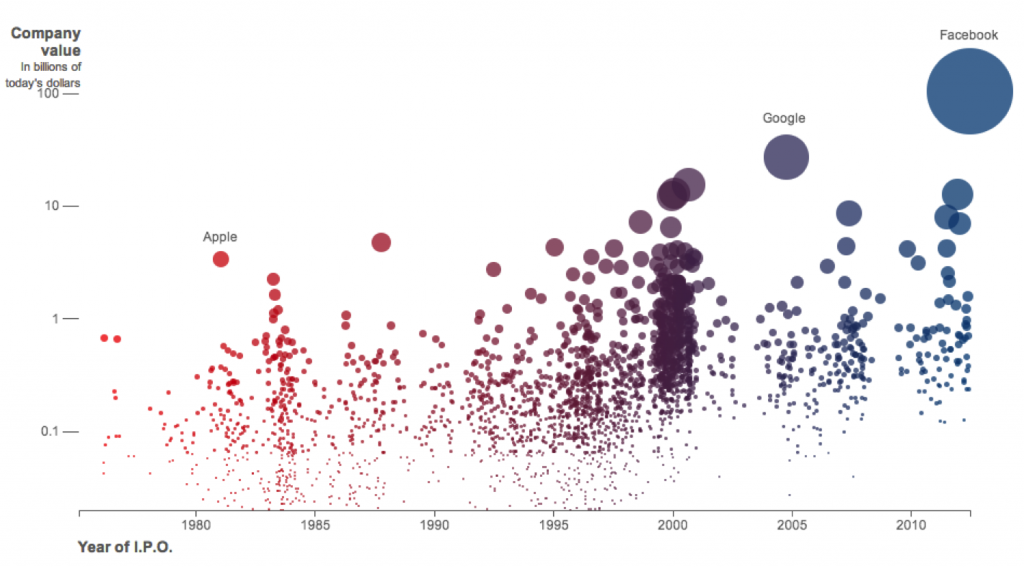 Some point to the increased cost of regulatory compliance as a result of Sarbanes-Oxley, enacted in 2002.  Others point to economic volatility since the 9/11 attacks.  Whatever the case, it is undeniable there have been fewer IPOs in recent history.

Having to take the company farther before founders and employees can take chips off the table changes the risk-reward equation.  Valuation comparisons based on a variety of metrics lead to different conclusions – but for rapidly growing technology companies, revenue multiple is often the best proxy for comparing valuations.  The range of multiples is all over the map, but with 2/3 of companies getting less than 4x multiples, who can blame an entrepreneur that builds a $10-$20 million company for exiting earlier with higher multiples to strategic buyers?  As one person I spoke with put it “these are smart people – they can take that and do it again – or just go play golf”.

I often hear it’s our culture in Atlanta that entrepreneurs cash out (earlier) and “live the good life” rather than do it again.  Given the multiple examples of Atlanta entrepreneurs that not only built pillar companies, but also continued to be active entrepreneurs and investors, I’m not convinced that is the case.  I think it has as much to do with the fact that most of the exceptions to this trend in recent years have been consumer technology companies.  Atlanta’s historical strength has been enterprise technology and the absence of these consumer tech exceptions that exist in other tech hubs may lead us to jump to the conclusion the trend is unique to Atlanta.

Both M&A activity and IPOs are increasing in pace again – so it’s unclear what this dynamic will mean going forward.  Companies like AirWatch, Bridge2Solutions, MailChimp, and SoloHealth remain in high growth mode and continue to scale so perhaps this will change.  In the current state, the private equity market will have to step in with investments that enable entrepreneurs to take some money off the table and fund the company for continued rapid growth if we are going to see more ‘pillar companies’.

What do you think?  Is cashing out early our culture in Atlanta – or is it a result of market conditions?

This week I (literally) handed over the keys to ATDC to Mike Hersh.  It has been a huge privilege to man the helm at ATDC – a startup incubator at Georgia Tech that Forbes named one of the “top 12 incubators changing the world.”  I agreed to chair the search committee and take on the interim role in part because I bleed ‘white and gold’ and it was an opportunity to serve my alma mater.  But the main reason was I believe ATDC is an incredible resource for entrepreneurs in Georgia, is uniquely positioned to leverage Georgia Tech to drive innovation, and is a resource that has barely scratched the surface of what it could (and should) be.

When I stepped into the interim role, Stephen Fleming told me he wanted me to “do more than keep the seat warm.”  So I dove in headfirst.  Thanks to the support and ideas of the ATDC companies, we made a lot of progress in a short period of time and I can’t wait to see Mike take it to the next level.

My time running ATDC has been an absolute blast and one of the most rewarding things I’ve done in my career.  Running ATDC means wearing many hats – coach, psychologist, economic development, landlord, and operator.  With so much going on in the Atlanta startup community, it was exciting to be at the center of it.  Without a doubt, the best part has been getting to know so many incredible entrepreneurs.  I learned a ton from all of our companies – new business models, industries, and technologies.  And I made some awesome new friends.

So why was I crazy enough to walk away from a job I love working with such amazing people?  The best analogy I can come up with is that heading ATDC is a bit like an alcoholic working in a bar.  I handed over the reigns to Mike so I can focus on my next chapter and where I want to be at this point in my life, on the other side of the bar – building an innovative company.